My son Landon just started kindergarten.  I’m so proud of him because he has glided into his new routine and new school seamlessly.  There were a lot of changes happening for us as he embarked on this new phase of his life, and he embraced it all quite well. 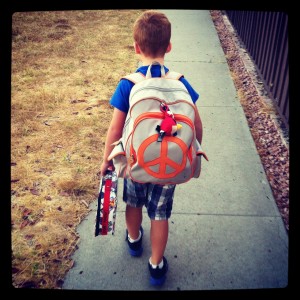 Landon was a little nervous about starting kindergarten yet excited about it at the same time. I was mindful about honoring his emotions and I told him a story about how I too was nervous and excited about starting kindergarten when I was a little girl.  I told him about riding the bus to school all by myself and how I didn’t know anyone.  He watched me with his crystal blue inquiring eyes and smiled knowing that I understood.

A few days into his first week of kindergarten, as we were driving home from school, I asked Landon some questions about his day.  He told me some things he did in class and at recess. I then asked him about who he sat with at lunch.  I recall asking him this question while looking at him through the rear view mirror while we were at stop sign.  I recall watching him as he took a deep breath and looked out the window as he replied, “I haven’t made any friends at the peanut-free table yet.”

My heart sank a bit.

I turned up my reassuring mom voice as I reached back and patted his leg as I said, “Well, I am sure you will.  Give it some time, sweetie.”

We drove down the road in silence for a few moments.

Then, he said to me, “Mommy, I wish there was a place where there were no peanuts.  Then I wouldn’t have to sit at the peanut-free table.”

My heart sank deeper this time.

There it was. My son was experiencing being different and expressing his feelings about it with me.   For the first time, I could sense him feeling not so fabulous about his peanut allergy. He was recognizing the space it was creating between him and his peers.

I wanted to compress those feelings into a pill and take it for him.

But I also knew that it is all part of his journey, and he is meant to walk this path.

It’s also part of my journey as his mother. My “job” is to love him, protect him, and empower him along his path.

Empowering Landon with his peanut allergy is something I have been very deliberate about ever since the afternoon I rode in the back of an ambulance with him when he was only 14 months old after he ingested peanut butter during a park play-date. Being chauffeured to the emergency room in an ambulance with my son strapped to a gurney was a big wake up call.

That day changed me and my awareness of this so called “allergy” because the usage of the word allergy doesn’t appropriately define what actually happens in his body.  You see, I am allergic to all things dairy and I have been since I was a little girl. But my allergy means that my stomach goes major crazytown whenever I eat anything that has dairy in it (milk, cheese, yogurt, ice cream, etc). Since I had been told my whole life that I had to ingest dairy products because it does a body good, I did.  But it didn’t feel good. In fact, it did nothing but wreck my stomach over and over again. Finally, I stopped eating all dairy products and educated myself on healthy options that made my stomach happy.

Some people who experience non-life threatening allergies, like my dairy allergy, tend to think a peanut allergy is similar because the word “allergy” can be interpreted in a variety of ways based on people’s varying levels of awareness and life experiences. However, a peanut allergy is less about an allergy and everything about Anaphylaxis.

How do I know this happens to him? Because I’ve been with him during two Anaphylaxis reactions that resulted in Epipen injections and ambulance rides to the emergency room.  That was beyond scary for this mama bear to experience, let alone the fear it infused in my son and his desire to never, ever deal with peanuts again.

Thankfully, in the past four years since that first peanut butter induced emergency room visit, I have been intentional about helping Landon speak up for himself to others about his allergy, and helping him recognize and communicate what it feels like when his throat starts to close and his breathing becomes labored.  I have also been intentional about letting him know that there are many things that make us all unique and different; and one of the things that makes him perfectly unique, besides his awesome crimson colored hair, is that he has a peanut allergy.

And guess what?  My son is listening!  Landon always asks adults to read the label before he eats anything.  He even makes sure that I read labels on any new food item, and he stand by me and watches me do it to ensure I am doing it.  He does that verification process with his dad, his grandparents, his aunts and uncles, and everyone else who offers him food. He’s on top of it! Now that is some awesome self-empowerment for my little guy.

Recently at a birthday party, Landon asked the adult in charge if the cupcakes had peanuts in them.  When the adult didn’t know, Landon asked her to read the label on the store bought package. He stood there patiently waiting for the answer. He knew that if the label indicated that there were peanuts or had been made on equipment that processes peanuts he wouldn’t eat it. And when he was told that the cupcakes indeed were manufactured on shared equipment, he didn’t have any poor me reaction about it. Instead, he shrugged his shoulders and went back to hanging out with his friends. He didn’t whine or complain. I believe that since he’s never been infused with any level of “poor Landon” in his circle of influence, so he has never adopted that mindset for himself.

Birthday parties usually involve a sweet treat, and I always want to make sure that Landon is included as much as possible in baked treat enjoyment with all the other kids. When he was in preschool, I baked cupcakes especially for him, and they were kept in the freezer at his school.  When there was a birthday party that included non-peanut-free treats, his teacher would get one of Landon’s cupcakes out of freezer, defrosted it, add some appropriate icing, and give it to him so that he could celebrate with a cupcake alongside his friends.  Happy boy! At a birthday party when he doesn’t get to have the dessert treat, I assure him that we can get a treat later. And often, when it’s later and he doesn’t care about having a treat anymore.

But now, here we are sinking into his new reality of being in kindergarten. There are a lot more kids at his elementary school than at his preschool, and that means more potential for peanut butter to come into Landon’s space. Thus, my son needs to sit at a safe, peanut-free table at school. That’s his reality.

I remember when I was conducting my search for elementary schools for Landon to attend, one of the main questions I asked during each school tour was how the school handles children with food allergies. I recall one school representative say that the food allergy kids who attend their school sit in the principal’s office to eat their lunch. I furrowed my brow and exited that tour as soon as I could.

At my son’s kindergarten classroom orientation, I made sure to let all of the parents of his classmates know that Landon has a peanut allergy. When his teacher announced that she doesn’t want any food items or treats brought into the classroom for birthday celebrations, I was the happiest parent in the room. The threat level was lowered to green plus I wouldn’t have to bake anymore reserve cupcakes. Score. Score.

So… School is in session and I can honestly say that at this point I have been as thorough as possible in safeguarding and empowering Landon.  I am happy to say that he is comfortable and thriving in his first few weeks of kindergarten.

Recently, I was walking with Landon to our car after school.  I had his backpack on my shoulder and his little hand was cupped in mine.  As we were walking hand in hand, I was listening to him tell me about the art project he did that day. At one point, a little girl walked by us and waved at my son as she said, “Bye, Landon.”

He smiled and waved back as he joyfully said, “Bye!”

I didn’t recognize her to be one of his classmates. I asked, “How do you know her?”

Landon smiled up at me and responded, “That’s my friend.  We sits together at the peanut-free table.”

I smiled and nodded as I held back happy tears. Friendships are blooming at the peanut-free table.

My son is blooming at the peanut-free table.

2019 Update: As with many things I share through my Kathryn the Grape series, readers are made aware of the feelings associated with lunchtime companionship through words and illustations in “Kathryn the Grape’s Magical Wand.” And yes, that’s Landon with Kathryn the Grape. He’s my greatest inspiration.