A prolific and purposeful storyteller, Kathryn has written and released seven full-length music albums in six years — four Kathryn Cloward and three Kathryn the Grape — and has written and published 29 Kathryn the Grape books. Expanding beyond her own creative realm, Kathryn writes and produces for others, with notable 2021 releases including a music album for Michelle Hopkins, a teenager with a rare incurable disease, and a memoir on behalf of Father Joe, one of San Diego’s most impactful humble heroes.

Backed by over two decades of visionary risk-taking business experience, Kathryn is a passionate and resilient self-driven serial entrepreneur of altruistic endeavors. She grew her first company to produce million dollar gross annual sales consistently — a result she attributes to cold-calling, relationship building, and strategic problem-solving. When the ripple effect of the 2008/2009 recession severely impacted her clients and then her company, she didn’t give up; she persevered by starting fresh and launching herself into the media market to cultivate her original creative endeavors and fulfill her childhood dreams.

Kathryn’s achievements and inspirational impact have been recognized throughout her career, notably with being honored with San Diego Chamber of Commerce’s Women in Leadership Award and Speak for Success’ Women Changing the World Inspirational Woman Award. She has received over 60 national and regional family media awards for her books and music, including multiple NAPPA Awards, Mom’s Choice Awards, and Family Choice Awards, plus San Diego Book Awards Best Children’s Fiction Book for Kathryn the Grape’s Kindness Confetti.

Sharing her music and messages with others is a joyful aspect of Kathryn’s dream fulfillment. She is a sought-after performer for family-friendly concerts and school events as Kathryn the Grape. She’s also performed her award-winning Kathryn Cloward music at some legendary venues, including headlining multiple times at the acclaimed Belly Up (Solana Beach, CA); opening for ‘80s popstar Tiffany at the world-famous Whisky A Go Go (West Hollywood, CA); performing at the legendary Troubadour (West Hollywood, CA); debuting in Arizona at the Mesa Music Festival (Mesa, AZ); opening for Nashville Unplugged (Las Vegas, NV); and performing at her hometown San Diego County Fair.

Kathryn has consistently channeled her energy into helping others thrive. For decades, she’s been a mentor to other entrepreneurs, a speaker for personal and professional development, and she’s assisted a variety of non-profit organizations and enrichment programs for youth. Following a 2005 charitable trip to remote villages in Zambia, Kathryn was ignited to do more to help children and families in Africa. She founded and energized a multi-city walkathon called “Walk Their Walk” with participants walking 12 miles, representing the distance village children walk every day to attend school. This immersive experience raised over $60,000 to fund two freshwater wells and help fund construction of a new school in Zambia.

In recent years, she’s poured her loving energy into helping raise awareness for local and national charitable causes, notably by writing and producing impact songs that often feature youth performers. “We Are Champions,” supporting children braving cancer and their families, debuted at Rady Children’s Hospital Auxiliary’s 2017 Celebration of Champions. “My Name is Divine,” supporting refugee youth and their families, debuted at Exiled Voices Refugee Art Experience in 2017. “We Are Heroes,” supporting children and adults with MPS, ML, and related rare diseases, debuted at the National MPS Society’s International MPS Symposium in 2018.

“This is a woman that knows how to take the bull by the horns! She does nothing half way – it is ALL the way and it is that emotion, attitude and drive that is reflected in her stage presence!”

“Kathryn the Grape is a 21st century Mr. Rogers. Her fictional book series is self-help for kids.”

I’ve worked with Kathryn for a long time and let me tell you, she has it all. From innate insight to ultimate negotiator, she gets it. She has a remarkable feel for business.

Kathryn Cloward is a human dynamo of can-do productivity and good vibes. Kathryn channels her creative talent into building quality content to improve people’s lives. What an inspiration for entrepreneurs, musicians and children! Her life experiences and lessons shine through as a songwriter, an author and a performer. You know that fantasy of walking away from a well paid corporate career to do what you love and achieve success? That’s the trail Kathryn is blazing and it is so fun watching her do it!

I have sought Kathryn’s counsel on many occasions over the years.  Before I launched my company, she helped me navigate that process and connected me to many business professionals I still work with today.  Kathryn’s depth of business knowledge has been an invaluable resource for me.  There have been a few key moments in my company’s fast paced expansion that I sought Kathryn’s assistance, and she guided me to making decisions that have ultimately saved me a lot of money and time.  Kathryn is an honorable woman of integrity.  It’s easy to see why she’s had a long and successful career.

Kathryn is an accomplished professional with a keen mind for business.  I have turned to Kathryn for advice and guidance throughout my career. An entrepreneurial woman/mom myself, I appreciate Kathryn’s dedication and commitment to her career while making her son her top priority. If you are looking to learn and be inspired from an accomplished business woman, Kathryn is a perfect choice.

Kathryn is one of the most focused entrepreneurs I know. She is a dynamic business owner and fabulous role model for other women who seek an entrepreneurial path.

Kathryn Cloward is an entrepreneur, innovator and creative-risk taker. She’s an inspiring leader, change-maker, and role model to women around the world.

Kathryn works with Intrepid Theatre Company as a featured artist and speaker for our community outreach and education initiative Exiled Voices: The Refugee Art Experience. Aside from her talents as a songwriter, Kathryn has an intuitive ability to cultivate empathy and understanding in her audiences and to create connections among diverse populations. Whether it’s a room full of community organizers, a classroom full of students or an audience in a sold out theatre, Kathryn speaks clearly and concisely from the heart in a way that is both inspiring and activating.

Kathryn Cloward is one of the most amazing, powerful, motivational speakers I have ever met.  I wanted to personally engage successful women entrepreneurs who were fulfilling their passion.  This conference provided profound perspectives on how to initiate a business as an entrepreneur, but the most captivating speaker was Kathryn Cloward.  Her message was transformational and inspiring as it empowered me with clarity and provided the necessary tools I needed.  Kathryn’s speech reinvigorated my passion! Her authenticity and transparency has left an indelible mark in my heart and because of her I now possess strength and confidence as a motivational speaker. Her optimistic message and charismatic personality is both entertaining and empowering.

Kathryn blends both her ability to connect with you and the mastery of communication through music. She is a wonderful speaker who can relate the issues of today’s society with what individual person’s are going through. You’ve got to listen to her!

Kathryn did a beautiful job creating the momentum of the day as the kick-off speaker at our parenting conference.  Her inspiring and passionate words were eloquently shared with the audience.

Kathryn encouraged the students to be open to their truth and creativity – growing as artists and thinkers – always honoring their most authentic being. Kathryn’s ability to motivate and teach and inspire – makes her a natural in the classroom. She is easy to listen to and she kept the students attention with stories – as well as entertained with songs.

Kathryn the Grape came to our school and what an amazing experience it was! She conducted two assemblies for the entire student body, and every grade level was engaged with her positive and empowering message. Kathryn Cloward had the students and teachers participate in her assembly, and she even had everyone dancing and singing with her. It was quite a sight to see! Kathryn’s message touched on every key point we could have hoped for, including important real life stories about bullying and being responsible for our own choices. Kathryn was a bright, energetic and motivational speaker who was able to connect with students and teachers alike. Kathryn is definitely someone you want your students to know.

I have had the pleasure of seeing Kathryn speak in public on multiple occasions and recommend her without reservation for any professional panel.  I first saw her leading a session at a women’s conference a few years ago.  She covered subject matter that included complex legal and financial details but did it in an informative and engaging manner that also included inspirational encouragement for others to reach entrepreneurial success.  I then saw her give a reading at a Barnes & Noble Bookstore where she entertained families and answered questions holding everyone’s attention in a challenging environment. Finally, having been impressed with her work and these speaking examples, I invited her to speak for a panel titled, “Understanding the Startup Eco-System in San Diego.”

Kathryn engaged our audience of entrepreneurs and corporate professionals with her tangible and relatable hands-on wisdom gained from her own entrepreneurial business development for over 16 years.  Kathryn knows her stuff, speaks from experience and honestly relates the ups and downs from her road towards astounding business achievements.  She is often humble about her successes, but it is rare to see an entrepreneur achieve her level of success single handedly.

If your group is looking for someone who can speak from experience and provide relatable, tangible, and candid examples of growing professionally and personally, Kathryn is the natural fit. I am confident your audience will appreciate her memorable presentation as much as ours did.

Kathryn is one of those rare performers that can, through her own raw, emotional, stories empathize with the audience. She’s there for them to lean on. Everything she does goes to that end, so recording her records is about us finding musical ways to illustrate and support that.

Kathryn is a true inspiration and musical healer with her uplifting, positive, and original songwriting.

Kathryn has an uncanny way of putting feelings into words and words into music that softly awaken a sleeping soul, renewing its energy and appetite. 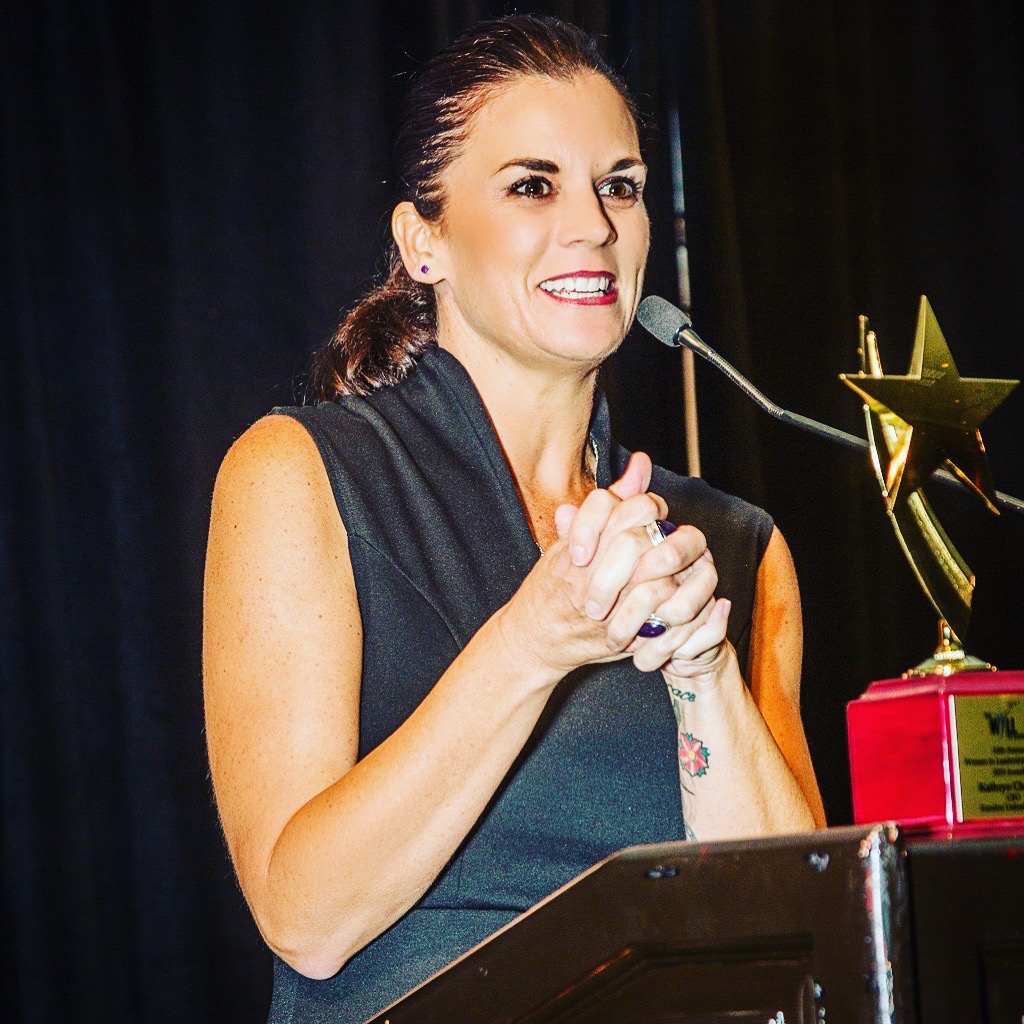 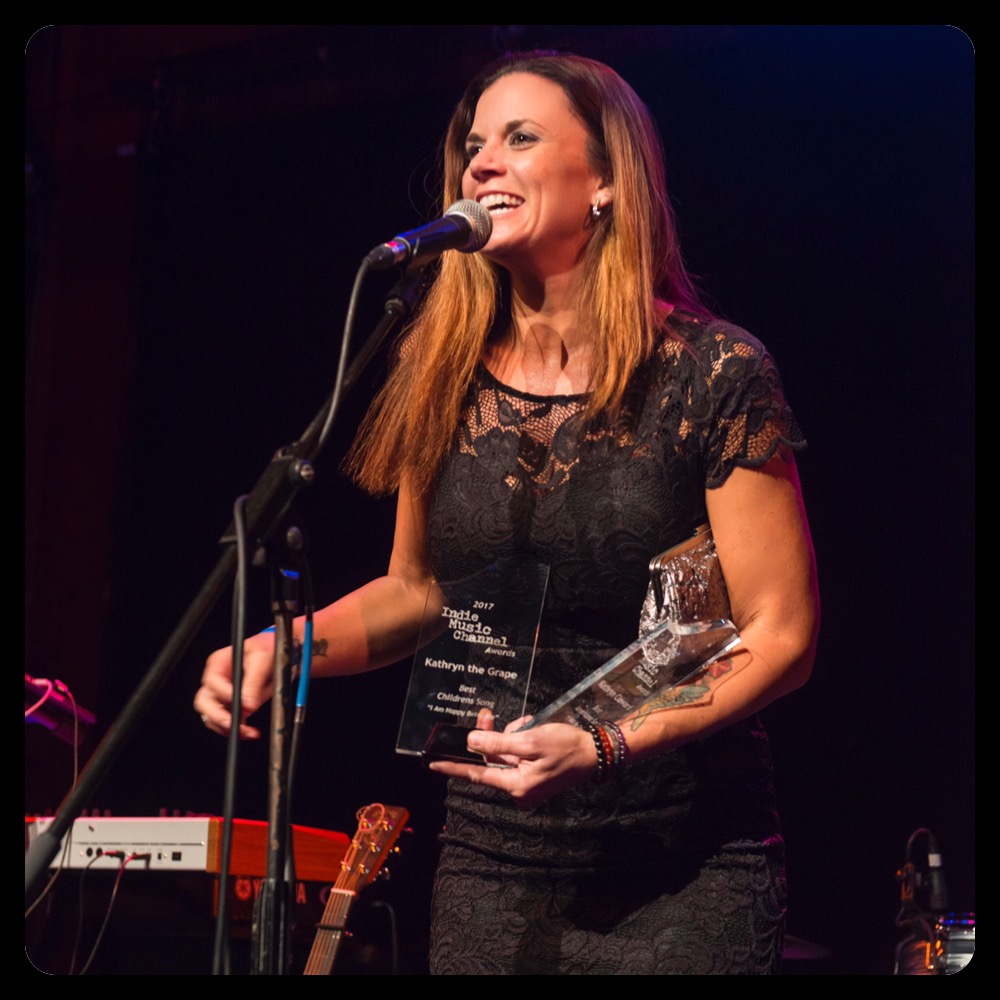 Do you want to connect on social media or send a message?
Contact Kathryn