Yesterday I took the afternoon off from work and picked my son up early from preschool so that we could decorate our house for Christmas.  It was a rather spontaneous plan and my son was thrilled to leave school before nap time.  I was quite happy to take a few hours off in the middle of the day to do something special with him to get our home into the Christmas spirit.

When I was growing up Christmas was a big deal in our home.  The traditions my parents created for Christmas are remembered with fondness.  As I recall, we always went to mass on Christmas Eve, came home and ate dinner, played some board games, and then we all opened one white elephant gift.

On Christmas morning the tree was always overflowing with presents.  Since my three older brothers and I only received new clothes on our birthdays and on Christmas morning,  our Christmas tree was stacked with packages filled with with socks, undies, sweaters, and pants.  It was quite monumental when we received a new board game.  One year we got a new Atari gaming system and we were over the moon!  Santa-Mom got major kudos for surprising us that year!

I am not exactly sure when I stopped believing that Santa was going to come down our chimney.  I was always mildly confused because my dad would burn a fire in our chimney on Christmas Eve, and then let the embers fade out as we went to sleep.  I wondered how the heck Santa was able to stay so clean coming down all those chimneys.

But one day, I did stop believing in Santa, and that’s okay, because the Christmas traditions and joy has remained with me through the years.

When my son was born, I recall wanting to incorporate our old traditions, while creating some new traditions.  One of which, was taking my son to get his picture taken with Santa.

When my son was one year old, I took him to get his photo taken with Santa (who happened to be my friend’s son dressed up as Santa at a local photo shop).  Needless to say, it did not go very well. 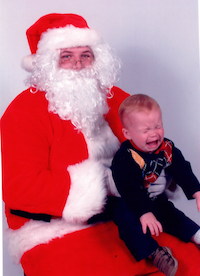 When my son was two years old, his dad took him to get his photo taken with Santa at the local mall.  They stood in line for an hour, including Santa’s 20 minute hot cocoa break, and when it was my son’s turn to take a photo, he was not happy at all. 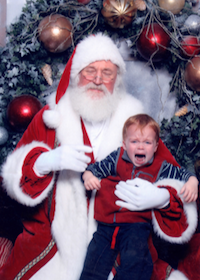 Now, these photos were both funny to us, and I thought for sure that my son would win Ellen’s funny Santa photo contest (that is, if only I had entered him into the contest).  I recall emailing these photos around to family and friends and we all had a big laugh, as this was not the Norman Rockwell style happy child with Santa photo that we are all used to seeing, or even thinking that we would receive after paying $20 for one print.

The photos were funny…until the day I realize they were not funny at all.

There was a period of time where my son was waking up many nights with nightmares.  This was during a time of our lives when his dad and I were separating, and the energy around us all was very negative and murky.   One night I went into my son’s room to cuddle with him and tell him that everything was all right, and then I asked him what was scaring him.  He then pointed to something that he was seeing and said “Santa.”

I asked, “Santa is scaring you?”

For my 2 1/2 year old son, the only way he could translate scared to me was by associating his experience with Santa because for him, those Santa photo ops were his go-to terror moments.  Nightmare translation to mommy…Santa!

So, as we sat in his room, lit by a simple night light, he told me about what he was seeing in his room, and how it was scaring him.  I then said, “I know how we can make scary Santa go away.”

His eyes lit up.

I left his room for a moment, turning on the overhead bedroom light for security, and returned with a bundle of sage and a lighter.

With his eyes on me every moment, I lit the sage and moved the sage around his room while saying, “Go-Go Santa.”

I did this all over his room.  Out of the corner of my eye I could see my son’s fear ease.  I asked him if I got it all, and he pointed to the corner by his window.  So I did one last, “Go-Go Santa,” and he smiled.

I put the sage in a bowl, turned off the light, and as I laid next to him for a few moments, he fell back to sleep soundly, and then I smiled.  I was proud of myself.  I did what felt right for him, and for me.  Now some people may think that was a little loony, but who cares.  My son felt heard, understood, and most of all, my son now knows how to get rid of what scares him.  As the months moved on and the energy in our home turned from murky to clear, every once in a while something would frighten my son and he would cry out for he and I to sage his room and say, “Go-Go Santa.”

***
I am happy to report my son’s fear of Santa did in fact go away, and when Santa showed up at his preschool last year, he was happy to sit on Santa’s lap and collect a present without fear.  Okay, fine, not happy…but not terrified either.

Exhibit C -for Claus… Santa Claus that is.