Are Pink Cars Real? A reminder about possibilities.

Yesterday morning when I was driving my son to school he asked me an interesting question.  We had been driving for a few minutes in silence, without conversation or noise from the radio.  As we sat waiting for a red light to turn green, I heard his voice from the back seat ask, “Mommy, are pink cars real?”

Curious about the reason for his question, I responded, “What makes you wonder about that?”

He replied, “I have never seen a pink car.  Does that mean they aren’t real?”

My mind flashed in a few directions as I considered what path I wanted my answer to take.  But I went with my original thought, as the first thought is always my intuition shining through.  My first thought was focused on teaching him a lesson about possibilities.

I said, “Yes, pink cars are real.  We just don’t see them very often.  If someone wants to have a pink car, they can have a pink car.  You can paint your car any color you want.  Anything is possible.”

“Oh.  Why doesn’t anyone paint their car pink?” He wondered.

I looked around and noticed a sea of beige and silver cars in my line of sight.  I shrugged and said, “I don’t know.”

“Maybe we will see a pink car someday,” he replied.

Nodding my head I said, “Maybe.”

We drove in silence again for a few moments.  I imagine he was absorbing it all in.  Being content with the completion of that conversation, he moved onto his next subject.  Disneyland!  He became super animated and expressive as he shared about his upcoming trip to Disneyland with his dad for his sixth birthday.   He has been boiling over with excitement about visiting the happiest place on earth.

After I dropped him off at his classroom and gave him a kiss goodbye, my mind switched to work mode.  I turned off… pack his lunch, spike his hair, and get out the door before 7:25am mode.  I turned on… pack my computer bag, gather paperwork for my meetings of the day, and figure out what to wear mode (which is always a chore because fashion and clothing have never been that important to me).

I didn’t think about pink cars again.  Well, at least not for a few hours.

Then, something from across the street caught my eye.  My eyes widened and I felt excitement overcome me.  I quickly grabbed my phone from my purse to take a photo.

I had to take this photo. 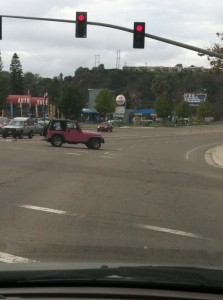 On the opposite side of the street, preparing to make a u-turn, was a pink jeep.

I was so giddy I could hardly contain myself.  I fumbled to get phone to photo mode and just as the pink jeep was making it’s u-turn, I captured this photo.

I was so excited!

As I drove behind the pink jeep for a while, I realized a few things.  For one thing, that was not the first pink jeep I had ever seen.  I have seen a lot of pink jeeps because they are everywhere in Sedona thanks to the Pink Jeep Tours company.  But, I didn’t think of that hours earlier when my son asked me about pink cars.

Secondly, and more importantly, that pink jeep was a sign.

I believe that my angels and guides are constantly communicating with me, and one way I receive their messages is through signs.  Since I am intentional about being open and receptive to that awareness, it has become easier for me to discern the meaning for each sign that is put on my path.  If you have ever been around me when I happen upon a penny on my path, you know I freak out with excitement.  The symbolism of pennies on my path is so significant to my journey that I am writing a song about the pennies, and I will soon be able to give honor to their meaning through music.

Similar to how pennies on my path are significant, encountering that pink jeep was significant too.   That pink jeep was a reminder of how absolutely awesome Divine timing is.  If there was ever a moment that I needed to be reminded about possibilities… that was a good moment to do so.

And here is the thing, I didn’t just encounter that pink jeep. It didn’t just cross my path.

That pink jeep was my escort.

I drove behind that pink jeep with Maryland license plates all the way to my first meeting.  As I turned into the street I was journeying to, the pink jeep continued on.  I was escorted to the first of my two meetings, meetings that required some serious Kathryn fearlessness, led by the day’s symbol for possibilities… a pink jeep!

I believe that my angels provided me with a pink jeep escort because they wanted to remind me to be open and receptive to what is being brought into my path.  I know that pink jeep was to serve as encouragement to not be afraid, and remain open to the flow.  I know that my angels provided me a pink jeep escort because they wanted me to be fully aware that indeed anything is possible.  That pink jeep represented the manifestation that anything is possible!   It was a reminder that I am able to tune in and make manifest anything that I put my Divine intention on.

I wonder if all of my angels and guides were gathered around spirit-storming about how they could help me tune into the sea of possibilities they want me to experience.  Perhaps a winged wise one suggested, “I know!  Let’s throw a pink jeep in her path.  She will be able to connect the dots.”  Then, perhaps they all cheered when I did in fact connect the dots.

Pink jeeps and pink cars will forever be my symbol for affirming that anything is possible.

Last night, I called my son at his dad’s house and I said, “You will never guess what I saw today?”

“Remember how this morning we were talking about maybe one day we would see a pink car?  Well, today I saw a pink car!”

I told him about having the photo on my phone and that I would show it to him when I picked him up from school.  Then, before we said goodnight, I said, “See Landon, it’s true.  Anything really is possible.”

Behind the Music, Inspiration, Kathryn

What’s desiring to be manifested through you?